SARMs have gotten extremely popular in the past few years. Most people don’t seem to know what they exactly are and what they are capable of doing.

Or perhaps you have a lifting buddy that uses SARMs and you would like to get some more information on these compounds.

There are so many misconceptions when it comes to SARMs. It’s often a topic of discussion whether a SARM works or not and if they have any side effects associated with them. First, let’s take a look at what a SARM actually is.

The word SARM is short for Selective Androgen Receptor Modulator. Mainly all of them were designed as alternative treatments to conditions such as muscle wasting diseases or obesity.

Make sure to check out the following video about SARMs, it will explain everything you need to know in just 1 minute:

Pretty much all SARMs are still being researched to this day as all previous studies have shown very promising results.

Basically what these compounds do is they selectively bind to the androgen receptors in the muscle and bone tissue. If you didn’t know, androgens play a crucial role in building muscle.

Because they do so in a selective way there is a much smaller chance of getting side effects, this is why SARMs are often considered to be a safer alternative to steroids and prohormones.

As you might know, prohormones and steroids are known to cause horrible side effects such as gynecomastia (gyno) and acne. With a Selective Androgen Receptor Modulator (SARM), you won’t have to worry about any of these problems.

In my opinion, Selective androgen receptor modulators are the next big thing. They allow you to enhance your performance without any limitations. There are a lot of different compounds, each and every one of them has it’s own unique set of benefits.

> SARMS4YOU BLACK FRIDAY SALE 30% OFF EVERYTHING <

Before we dive into the types of SARMs available let me start off by saying MK-677, GW-501516 and SR-9009 are NOT SARMs. MK-677, which is also known as Ibutamoren or Nutrabol is a growth hormone secretagogue.

This means it has the ability to increase growth hormone levels which is pretty amazing. Ibutamoren is great for improving skin, hair, and joints.  You will see most people stack it with a mass builder such as LGD-4033 or RAD-140 for a synergetic effect.

SR-9009 (Stenabolic) And GW-501516 (Cardarine) aren’t SARMs either. The main reason why people think they are is because of how vendors market them. Usually, you’ll see suppliers just sell them as a SARM because its easier.

Let me tell you what they actually are.

Cardarine is a PPAR agonist, which means it is able to boost metabolism and endurance. GW-501516 is often used by athletes to help increase physical performance and to help burn fat. It’s actually one of the strongest endurance boosters currently available.

Stenabolic is a Rev-Erba agonist, which is also known for having a huge impact on cardiovascular performance and metabolism. You will often see researchers stack Cardarine with Stenabolic in order to optimize endurance and burn an insane amount of fat.

Now that’s been cleared up let’s move onto the compounds that actually are considered to be SARMs.

Let’s start off with Ostarine (MK-2866), which in my opinion is one of the most effective SARM available. It is a very mild compound but has the ability to change a physique.

You will experience no suppression with Ostarine at a low dosage of 20 to 30mg a day. It is mainly used for both cutting and bulking.

In a caloric deficit, it will really shine as it will make you hold onto your lean muscle mass and strength.

RAD-140 (Testolone) is one of the strongest SARMs available. It’s referred to as Testolone because the strength of this compound is comparable to Testosterone. Even a dosage as low as 10mg is known to take a physique to the next level.

With RAD140 you can expect serious lean muscle and strength gains.

RAD140 has excellent pharmacokinetics and is a potent anabolic in nonhuman primates as well. We believe the overall preclinical profile of RAD140 is very good, and the compound has completed preclinical toxicology in both rats and monkeys.

Another great SARM for gaining lean muscle mass is LGD-4033 (Ligandrol). It’s also one of the more popular SARMs. LGD-4033 is great for bulking and putting on size.

Most users don’t experience any suppression or side effects with this particular compound. It will help you put on size and strength within a short period of time.

YK-11 is a rather new SARM which has shown to be extremely strong. Multiple studies have shown that YK11 is as strong as Dihydrotestosterone (DHT). It’s also mainly used to pack on muscle mass or can even be used for a recomp.

Andarine (S4) can be effectively used for both cutting, bulking and recomping. It’s also a very powerful compound and even in a caloric deficit, you can expect to gain muscle mass and strength.

Often users stack SARMs such as Andarine with MK-2866 (Ostarine) in order to get the best results.

One SARM that you probably don’t know is ACP-105. It’s not really that popular because there isn’t a lot of information available on this compound. It’s also quite impressive but doesn’t seem to be as strong as the other SARMs such as LGD-4033.

AC-262,536 is quite a weak SARM. It definitely doesn’t compare to the other SARMs used for bulking. In my opinion, you are probably better a different drug.

We aren’t finished yet, there is one more SARM we haven’t discussed. It is called S23 and let me tell you, this stuff is STRONG.

Most people stay away from it mainly because it tends to have side effects such as aggression. But this SARM is probably stronger than even RAD-140 and YK11.

My Experience With SARMs Vs Steroids

I have used pretty much every SARM. Having used both Selective androgen receptor modulators and steroids I found the results to be very impressive.

A lot of people have asked me what I think about SARMs Vs Steroids.

Of course real steroids are stronger but they also carry more side effects. When researching with SARMs you can expect good results without a lot of side effects.

With steroids you’ll quickly run into acne, hair loss and heavy testosterone suppression. This is much less likely to happen with these compounds.

I found oral steroids such as Dianabol and Winstrol to have a lot more negatives than with Ostarine and Ligandrol for example.

Of course, both set of compounds have their pros and cons. 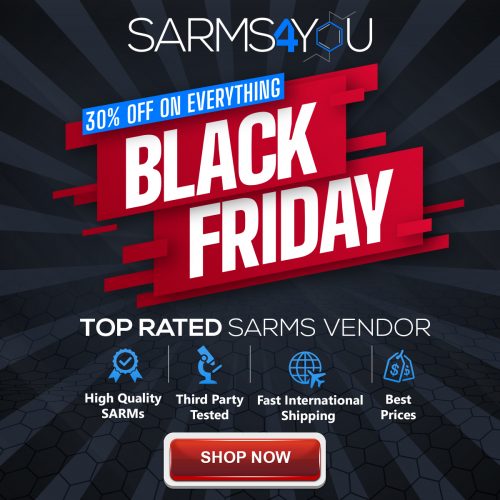 Sarms And Side Effects

There is a lot of discussion on whether SARMS have side effects or not.

You should not be experiencing any severe side effects from using SARMs if you are staying within dosage guidelines.

That means you shouldn’t be doing anything stupid and taking way more than you are supposed to be taking.

The main reported side effect is suppression.

This means that your natural hormone production will be suppressed.

How do you know if you are suppressed?

You will start to experience low testosterone side effects. This means you will lethargic and basically have no desire to do anything. Some people will require a proper SARMs PCT in order to restore natural hormone production.

The following compounds can be suppressive:

With GW-501516, SR-9009 and MK-677 you will experience NO suppression. They do not interfere with the body’s testosterone production. This means they also do not require any kind of Post cycle therapy (PCT).

Of course, they won’t be as suppressive as prohormones or anabolic androgenic steroids. It’s recommended to have a SARM PCT on hand when starting a cycle, even if you don’t end up needing it.

Other reported side effects of SARMs are nausea and headaches. However, there is no proof that these side effects are a direct cause of using the compounds.

A question I get asked a lot is…

The truth is, nobody really knows whether they are safe or not. The research on most of them is limited. We simply don’t have enough information to tell whether or not they are safe.

A lot of these research chemicals are still being studied to this day. Some clinical studies have shown promising results but the long-term side effects are still unknown.

If you do plan on researching with these compounds you have to make sure you are purchasing them from a reputable vendor. This is because some products labeled as SARMs don’t actually contain the correct compounds.

Where To Buy SARMs

You need to be extremely careful when looking on where to buy SARMs. It’s very important that you are purchasing them from a good supplier.

Unfortunately, I’ve purchased bunk products before and trust me, it’s something you don’t want. Due to regulations a lot of vendors have stopped selling SARMs.

Luckily, there are still a few good ones left. My personal recommendation would be Sarms4You. They have been my to-go source for quite a while now. I am very satisfied with the quality of their products.

Having personally tried these guys their products I am 100% confident they are real. They also provide third-party documents in order to show that they sell real products. It’s also worth mentioning that they have great customer support and ship out within a few business days.

Do SARMs Have Side Effects?

Yes, they have side effects. However, I found SARMs to have much less side effects than steroids.

But you should know that the long term effects are yet to be discovered.

In my opinion LGD-4033 and RAD-140 are the best sarms for bulking. They are very effective when it comes to building size and strength.

Based on personal experience I would say MK-2866 and S-4 are the best sarms for cutting. They are known to preserve muscle and keep you tight during a cut.

Do they require a PCT?

It’s hard to say. Some require one whilst others don’t. It really depends on which compound you are researching with and for how long.

Do They Really Work?

Anecdotal experiences tell us that they do really work. You have to make sure you have the real deal though. There are a lot of vendors selling bunk products which is why I recommend Sarms4You.